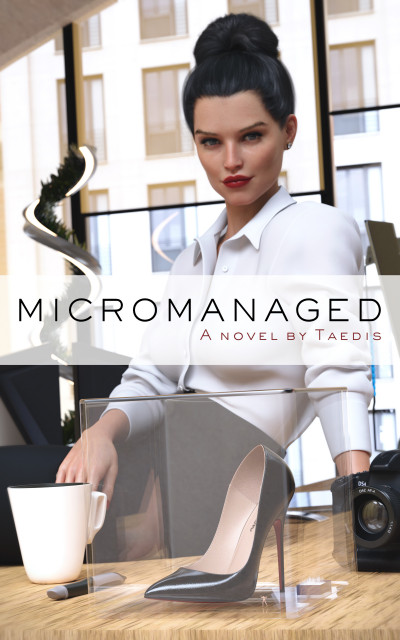 In a world of constant innovation and miniaturization the only thing that humanity had left to innovate and miniaturize was themselves.

Until the Stovent Company opened their doors for business.

Most people don't recognize Richard Stovent's name or the company that bears it. “The Stovent Company” doesn't fit a headline or chyron as neatly as “Shrink Inc” does so most people don't associate the dour sounding name with the company that claims to have revolutionized humanity. But anyone paying attention knows the name that pushed through sweeping legislation, altered the social landscape, and introduced technology that stepped out of a science fiction movie.

There were, of course, catches.

The process was irreversible; once shrunk the target could never return to normal.

In order to avoid liability any person wanting to be “resized” had to sign away all of their rights. Not only as a citizen, but as a human being. Once shrunk they would become property to be bought, sold, or bartered at the whims of their new owners.

No one thought they'd find even one person willing to be turned into a human toy, but they soon had a waiting list of people willing to spend fortunes to become nothing. The first human shrinking subject, known only as Patient Zero, was shrunk to the size of a postage stamp before the ink was dry on the legislation legalizing his shrinking.

At least that's the story the networks want you to believe. The truth is a bit dirtier than that. A sordid little tale of a cliché of a man who risked his life not so much for science so much as the fame and money they could make him.

His experiment was a success; from a certain point of view. He walked into the chamber a fully grown man only to come out the other side half an inch tall.

The only person who knew about the experiment was his gorgeous and much put upon secretary. She had undergone months of degrading treatment only to now find her pig of a boss literally in the palm of her hand.

On that day John Harper left his life of sleeping in, taking long lunches, and hitting on his secretary. Traded that in for a life of a lab rat living in a plastic prison. Slowly devolving from business leader, to pet, to foot slave to his former underling. Stripped of his clothing, his money, his power, and position he must do whatever he can to survive, in the hopes that he will one day be allowed to return to the human life that had been abruptly taken from him.